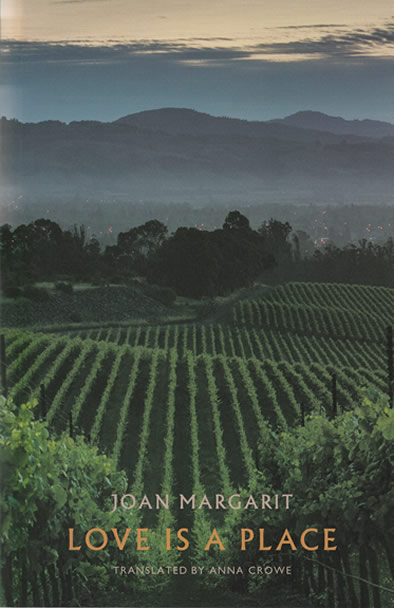 David Cooke finds Joan Margarit to be a poet of authentic experience who does not rely on tricks or strain after effect.

Love is a Place brings together Anna Crowe’s versions of the three most recent collections of poetry by Joan Margarit, the greatest living Catalan poet and, many would claim, one of the most significant poets writing in Spain today. It follows two previous English-language volumes of his poetry: Tugs in Fog (Boodaxe. 2006), a generous sampling from his first twenty years’ work, and Strangely Happy (Bloodaxe. 2011), which brought together two subsequent collections. Although Catalan is Margarit’s mother tongue, he started out as a poet writing in Spanish and was educated in that language during the years of Franco’s dictatorship, when the speech and culture of Catalonia were repressed. The poet’s bilingualism and his family’s experience of Spanish history are important aspects of his poetry, as expressed here in the opening lines of ‘Pillage’:

In ‘A History’, he faces unflinchingly his country’s past and his own family’s involvement in it:

Significant, also, is the fact that Margarit is not a ‘career poet’, but was active as an architect for all of his professional life, a fact that has informed poems such as ‘Visits to Building Works’ or ‘Babel’: ‘I dreamed that I had to make the calculations / for a building of a thousand floors’ It is, perhaps, the attention to detail and the scientific discipline that is required of an architect that has shaped Margarit’s humane and unpretentious approach to the art and craft of poetry. In the eloquent prologue that he wrote for Tugs in Fog, he speaks of what poetry means to him and what he has tried to achieve in writing it. They are words well worth the consideration of any aspiring poet. For Margarit, poetry is unashamedly subjective and should arise from deeply felt, authentic experience. It is not about tricks or straining after effect. Early on, he quotes from Diderot: ‘Mediocrity is characterized by a taste for the extraordinary.’ For Margarit, as for Wordsworth, ‘poetry takes its origin from emotion recollected in tranquility.’ In fact, he seems to feel that the poet is almost forced to memorialize his past experience, whether he wishes to or not, that ‘forgetfulness’ is ‘a badly closed door’.

It is this truth to experience, conveyed in poetry that is uncluttered, articulate and devoid of pretension, that enables it to speak across a linguistic divide, although it should be said that Margarit has been fortunate in the close working relationship he has developed over the years with his English translator. Moreover, as Crowe suggests in her own introduction to Tugs in Fog, Catalan is a more consonantal language than Spanish and has a more staccato feel to it, which tends to harmonize well with the rhythms of English. This is exemplified in the bruised stoicism of ‘It Wasn’t Far Away or Difficult’, the title poem of the first collection included here:

Here the poetry is a question of grandiloquence and measured cadences, its musicality enhanced by alliteration and vocalic harmony. It’s a poetry based on the truth and simplicity that we often seem to have abandoned in our quest for novelty and far-fetched imagery. Referring again to Margarit’s prologue in Tugs in Fog, the reader will note his insistence that ‘poetry is not a question of content but of intensity.’ While one may accept that there is some truth in this statement, the content is nonetheless important in Margarit’s poetry and focuses on what is most important to us all: mortality, suffering, isolation, and the hard-won moments of love and peace that are achieved against that backdrop. It should be noted also that if Margarit’s poetry works so well in English, that may also owe much to his affinity with certain English poets, most notably, Hardy and Larkin.

At times he reminds one also of Cavafy in his evocations of old age. In ‘Strolling’ an old man remembers himself as ‘a serious child’ who ‘has been obedient all his life’ but concludes with a beautiful evocation of human transience:

As with Cavafy, old age brings wisdom and a sense of resignation that is nonetheless tinged with regret. In ‘I’ll Wait for You Here’ he laments that ‘ now / no women would want to dance with him. And he resigns himself to it, but he doesn’t smile’. As in the work of the great Alexandrian, there is also candour in acknowledging one’s sexuality. Here he is in ‘Old Man on the Beach’:

However, love in all its forms is central to this poet’s work: the love between a man and a woman and that between family members and, in particular, the poet’s love for his handicapped daughter, Joanna, who died prematurely. Its importance is made clear in the final lines of ‘Love is a Place’, the title poem of his most recent collection:

Sometimes the poet evokes the seeming impossibility of maintaining love, as in ‘The Sun on a Portrait’: ‘So much talking and so much arguing / while our love was slipping away from us’. In ‘Infidelity’ loss is clouded by guilt. In ‘Suffering’ he describes the anguish of parents at the inevitable loss of a child: ‘In the Accident & Emergency corridor I saw / our helplessness in your eyes.’

In Margarit’s poetry the reader will find no easy answers. In ‘The Origins of Tragedy’, God is dismissed as ‘the most brutal of myths’. Philosophy, likewise, provides no satisfactory explanations in ‘Lyric at 70’:

Ultimately, all the poet has is his poetry, a difficult and challenging art which is sometimes analogous to the rock of Sisyphus, but which nonetheless gives him solace and moments of illumination: